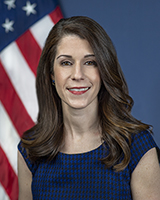 Ms. Seese Whelan began her career in government oversight and auditing at the U.S. Government Accountability Office in 2006. She then moved to Computer Sciences Corporation in Arlington, VA, where she helped the Missile Defense Agency enhance its relationship with government auditors. She rejoined the Federal auditing ranks at the Office of Inspector General for the Troubled Asset Relief Program, where she reviewed homeowner retention programs.
Ms. Seese Whelan joined DOT OIG in 2010 as a Senior Analyst and was soon promoted to Project Manager, leading audits focused on the Department of Transportation’s rail, maritime, and transit programs. Four years later, she became DOT OIG’s first New Hire Workforce Development Manager; in that role, she centralized the onboarding process and designed the New Employee Orientation Program, which has since helped welcome and integrate hundreds of staff members. From 2015 to 2019, she served as the organization’s Chief of Staff, helping the Inspector General and Deputy Inspector General conduct collaborative strategic planning, implement decisions to meet mission needs, and manage day-to-day operations.
Her achievements have been recognized by awards from the Secretary of Transportation and the Council of Inspectors General on Integrity and Efficiency. In October 2018, she received DOT OIG’s highest honor, the Inspector General’s Distinguished Service Award, in recognition of her achievement of results with a lasting impact and her commitment to the core values of “Mission First, People Always.”
Ms. Seese Whelan holds a bachelor’s degree in broadcast news from Kent State University. 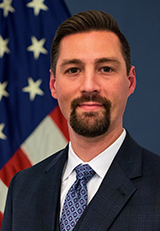 As Director of the Office of Government and Public Affairs, Nathan Richmond serves as the main point-of-contact for Members and Committees of Congress and as an official spokesperson to the media. Additionally, Nathan acts as a primary liaison to the Office of Management and Budget and the Council of the Inspectors General on Integrity and Efficiency (CIGIE) as well as the Government and Public Affairs Offices of the Office of the Secretary of Transportation and each of the Department of Transportation’s (DOT) modal Operating Administrations.

Mr. Richmond began his career in the Federal government in 2002 at the U.S. Senate Committee on Environment and Public Works. There he was responsible for a broad legislative and oversight portfolio for the Chairman of the Committee covering a range of highway safety, Federal lands transportation, and fish and wildlife issues.

After departing the Senate Committee as Counsel in 2007, he joined the DOT Office of Inspector General (OIG), where his role and expertise grew to managing a team of Government and Public Affairs Officers responsible for legislative and media relations related to OIG’s oversight of all DOT Operating Administrations and programs.

Mr. Richmond has received numerous OIG and CIGIE awards for his contributions toward a variety of multimodal audits, investigations and special projects, including the Distinguished Service Award in 2018, which is the DOT Inspector General’s highest honor.

Mr. Richmond received a Juris Doctor degree from the Oak Brook College of Law and Government Policy in 2004.