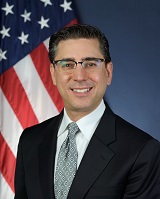 As Inspector General, Mr. Soskin leads OIG's independent and objective reviews of the efficiency and effectiveness of DOT's programs and operations, as well as efforts to detect and prevent fraud, waste, abuse, and violations of law. Mr. Soskin was sworn in as the Inspector General of the U.S. Department of Transportation on January 11, 2021. Mr. Soskin was nominated to the position by President Donald J. Trump and confirmed by the U.S. Senate on December 21, 2020.

Mr. Soskin’s lifetime commitment to public service began at the U.S. Department of Justice (DOJ), where he worked for 14 years as a trial attorney, advancing to the title of Senior Trial Counsel. Mr. Soskin’s time as a career civil servant with DOJ spanned three presidential administrations and numerous Attorneys General. As a litigator with the Federal Programs Branch, Mr. Soskin specialized in constitutional law, administrative law, and national security matters. In his work, he led cross-functional teams of attorneys and experts, representing Federal law enforcement and other agencies from across the executive branch on complex, sensitive, and high-profile cases. Mr. Soskin is a recipient of the Attorney General’s Award for Distinguished Service.

Prior to his role at DOJ, Mr. Soskin clerked on the United States District Court for the Eastern District of Pennsylvania for the Honorable Paul S. Diamond.

A native of South Bend, Indiana, Mr. Soskin lives in Fairfax County, Virginia, with his wife and two sons.